Recently I was asked at work for quick review of small project. It was created (or updated) in newest version of Visual Studio – 2012. I don’t have installed VS 2012.

I could install it, yes, but it would be just waste of time since browsing through code in that project took me only few hours.

It was not surprised that didn’t work entirely. I was expected that I won’t have possibility of building it – .NET 4.5 was not even installed on my machine. But to see “incompatible” next to project name was surprise to me indeed. It was strange I was suspecting that lack of .NET 4.5 binaries could cause that. But installation of framework did not help. I still was seeing this:

That is strange. I would thought that Microsoft at least would allow me to browse through files and see contents of project. I guess they would try every little thing they can to sell they newest software 🙂

So I thought to try to open this project in version 2008. Just for fun and this was surprised it worked 🙂 I even get message ‘build succeeded’ when I tried it, but I have to mention that was only once and after opening files with errors (non existent namespaces and classes) it no longer worked 🙂 But it was ok since I was only required to look at the code inside.

After ‘build succeeded’ info I tried to open project properties of project and get this: 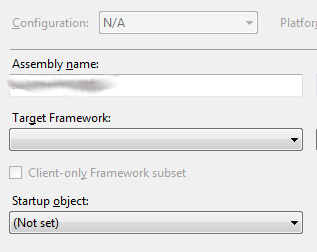 Nevertheless I done my work using VS2008.

Why Microsoft would block something in VS2010 and no in 2008. Maybe users of second are considerably less numerous so it was just to expensive to do such thing.